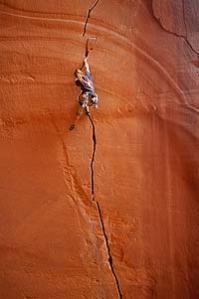 In the fall of 2004, the Bureau of Land Management (BLM) finalized itsIndian Creek Recreation Plan. This progressive plan outlines a new era of BLM management for camping and climbing at Indian Creek, and provides an unprecedented opportunity for climber self-management and a no-fee trial period. The Indian Creek Plan seeks to protect the area’s fragile resources and prevent unnecessary developments that would forever change its primitive character. Plan implementation will begin over the winter in time for the 2006 spring climbing season.

The BLM office in Monticello has asked the Friends of Indian Creek to remind climbers that there is a 14-day limit on camping on BLM Land. The F.O.I.C. understands that there is a bit of a history of staying in the Creek for far longer, but heavy climber-traffic in the area has made the BLM take notice of this tradition. Be aware that overstaying the 14-day limit makes climbers look as if we feel the rules don’t apply to us and thus has an effect on long-term access. Moving your campsite throughout the season, or perhaps finding a site outside the main Indian Creek area, will not only help smooth relations with the BLM, but will also keep you from possibly getting hit with a fine.

Some areas will be closed to camping (notably, the Newspaper Rock Campground and about 10 campsites along the Bridger Jack Road), although less than 4% of the management area’s approximately 100,000 acres will be closed. Campers can continue to use nearly all of their favorite campsites as long as no new sites are established. The “Bridger Jack” and “Creek Pasture” camping areas (the latter informally designated for group camping) will be open to designated sites only, and dispersed camping throughout the remainder of the corridor remains available in established sites. The BLM will implement no facilities or services for camping (except for one toilet at the Beef Basin turn-off from Hwy 211), and therefore will charge no use fees.

A two-year trial pack-in/pack-out policy will be enforced for human waste and garbage in all portions of the management area. If at the end of the trial period, this policy were found not to be effective the BLM may close some areas to dispersed camping, and toilets may be installed. At that point, various options for covering the cost of installation and maintenance of any necessary restrooms will be explored, including user fees. With financial help from the American Alpine Club and Friends of Indian Creek, new kiosks have been installed at a few key locations outlining management changes, in particular the new human waste policy. “Restop” dispensers will provide campers with human waste disposal bags for the climbing season. These are an environmentally friendly and sanitary bag that can be disposed of in any trash container. A donation of $2 per bag is suggested. Please donate to keep these dispensers full!

How to do an Indian Creek Pooh!

The Restop Movement Video Starring Timmy O’Neill to Promote Responsible Waste Management at Indian Creek January 23, 2006, Moab, Utah – Thanks to the help of several outdoor industry sponsors and the work of an ace production staff, the Friends of Indian Creek have just released a ground-breaking video starring Timmy O’Neill that promotes the use of Restop bags as a means to protect the fragile desert environment at the increasingly popular Indian Creek and Castleton climbing and camping areas in Southeastern Utah. Designed to help ensure the success of the Bureau of Land Management’s newly-issued progressive recreation management plan for Indian Creek, The Restop Movement will help educate desert regulars why and how everyone must pack out their own waste-all of it. “Restops are the way to go in the desert,” said Timmy O’Neill, “especially at places like Indian Creek and Castleton. They’re easy to use and you can dispose of them in any trash can. They’ve been using this system for over 20 years on river trips. If we can pack out our own waste we can keep the camping free and primitive.”

The BLM have installed 4 kiosks with Restop dispensers. There will be information posted on these boards and Restop bags for use. At each kiosk, there is a donation cylinder where donations will be gratefully received to help pay for wagbags. Suggested donation is $2 per bag. The first load of Restop bags have been donated by the American Alpine Club. These will need to be replaced, so please contribute. The Restop kiosks are located at the following areas: Battle of the Bulge parking lot, Pasture Creek camping area, Bridger Jack camping area and the Superbowl camping area. We are trying to make it easy for climbers to use these Restop, please use them and pack them out with you.

We are running out of Restops fast. This means that people are using them and that is great. It just isn’t that bad, and is way better than the alternative. But we need to replace them, and we need donations, so please help us.

It is possible that when you arrive at your site the kiosks may be empty. Don’t worry!! More will be on the way soon, but in the mean time you can bring your own or you can purchase them from paganclimber.com in Moab.

Click here for some information on the Restop bags we are now using.

Actual climbing restrictions in the plan are few. As always, no climbing where it conflicts with cultural resources (like Pink Flamingo and other routes near rock art and ruins), and the BLM may also seasonally close climbing routes which adversely impact nesting raptors/owls. The establishment of new routes and the placing of anchor bolts remain permitted

Many climbers are drawn to Indian Creek not only for its unique hard-core crack climbing, but also its primitive, wide-open feeling. If the “Creek” doesn’t exemplify the Wild West and freedom then no place does. Still, what climbers may perceive as public land might actually be private Dugout Ranch property; what now seems like unmanaged use could in the future be closed or restricted.

Climbers cross private property at least a little every time they approach Supercrack Buttress, Battle of the Bulge, Donnelly Canyon, New Wall, New Wave Wall, Paragon Prow (AKA the Sundial), Tricks Wall, Scarface, and Love Wall. We drive across Dugout property (on a county right-of-way) every time we camp or climb at Bridger Jack. For many years, crossing Dugout land was tolerated because of the positive relationship forged between a few climbers and longtime owner of the Ranch, Heidi Redd. Even when a few careless climbers let their campfire burn down a few of Heidi’s cottonwood trees, she continued to allow access. When campers began to trash the side canyons near Supercrack and Battle of the Bulge, Heidi graciously made an arrangement with climbers: she’d allow continued access across her land to Supercrack and Battle of the Bulge if these side canyons were blocked off from auto access and allowed to restore. For nearly forty years, Heidi Redd has run the Indian Creek Cattle Company and held the Bureau of Land Management grazing leases adjacent to the Ranch. These grazing “allotments” cover significant Indian Creek locations including the popular campsites along the Bridger Jack Road and Superbowl Site, and the fields below Cat Wall. On most days you can see Heidi’s cows or horses grazing on these public land allotments. In 1997, The Nature Conservancy bought Dugout Ranch and currently manages it to fulfill three major stewardship goals: the preservation of the property’s ecological and open space features, the use of the property as a resource for ecological research and natural history interpretation, and the continuance of a historic ranching operation, with the least environmental impact. Under the terms of the Dugout Ranch sale Heidi retained a life lease of 25 acres and her home (she can live there until she dies) and a 10-year lease of the Ranch to continue her cattle operation. Heidi owns the cattle and the Indian Creek Cattle Company and currently holds the grazing permits associated with Dugout Ranch.

There are real impacts associated with grazing on public lands, and some would rather not see cows grazing at all along the Bridger Jack Road and other public land allotments. However, Heidi’s Indian Creek Cattle Company pays for that right, and has for several decades now. Climbers, on the other hand, have only been climbing at Indian Creek in significant numbers for the last ten or so years. Although some folks would rather see the BLM terminate these grazing leases, under the current system if Heidi ends her grazing lease then another rancher could step in and install their ranching operation. Since she began ranching the land in the mid-1960s, Heidi has been conservation minded. Indian Creek Cattle Company has always run fewer cattle than its predecessors and often fewer than current permits allow. Heidi and her cattle company have worked to maintain native grasses and restore/maintain the critical riparian corridor of Indian Creek. There’s no assurance that another rancher would do the same.

In a number of areas at Indian Creek, conflicts have sprouted between climbers and Heidi’s cattle operation. The most common is the dog/cow issue. Even if you feel you have an absolute right to camp and climb at the Creek, following these few basic guidelines may help keeping you climbing on some of Indian Creek’s best crags: